Cash is Down for Maintenance?

So I was thinking of playing a table or two of some NL Cash games, I’m getting a red message that it and the Jackpot sit n go’s are down for maintenance. Why don’t you have a stickie to inform us downtime be it scheduled or an outage. The constant problems with your poker client just keep getting worse and worse. 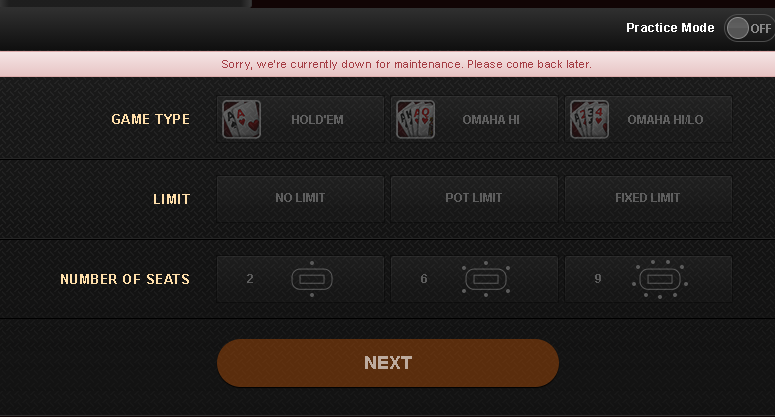 I’m also having the same old issue with the ‘cannot connect’ window popping up over and over and over again while I am looking at the tournament information window. Are we at least getting compensated this time for yet more downtime?

So for nearly the entire time I was playing in my tournament I could not open the tournament lobby, so I could not see what my standing was, I couldn’t see how many people were in, how many were left, what the average stack size was, nothing. The tournament info panel on the table stopped updating half of the information it’s supposed to show. I was at an informational disadvantage and in poker that is TERRIBLE! I have to say that I am honestly upset that I didn’t have access to the same information about the tournament I was playing in as the rest of the player pool.

I hope that you are able to make this right. This is not a new problem. This is something that has been reported many times, over a long period of time. You have also claimed on multiple occasions that these issues have been addressed and that they were resolved. That is obviously not the case. If your position is that these issues are resolved, then I disagree and would like to request an official response. This is the type of problem that gets reported to gaming commissions.

No reply from Ignition in 4 days.

I’m sorry that this wasn’t addressed.

Are you still encountering any issues? Have you attempted to uninstall and re-install the client?

For any affected tournament, can you please PM us the tournament details so we can take a deeper look

I was playing off of a fresh install of the poker client. I don’t know if I still have the tournament issue because I haven’t played in one since the problem started. I’m not seeing the maintenance message on cash games anymore. The tournament# is 43194479. The tournament info stopped loading and the side information panel stopped updating before late registration ended I remember that. As far as the exact blind level I’m not sure it was around when the average stack was around 100k. It never updated after that point.

We will send you a PM