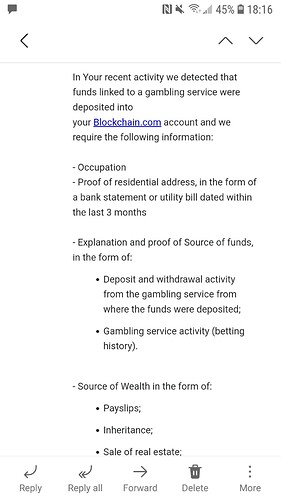 We definitely wouldn’t recommend saying your funds came from a gambling site as they have restrictions in place for this type of activity. Has anyone else had some experience with these type of reviews?

What on earth am I suppose to say? Just take a loss and leave the money? That enrages me

Similar thing happened to me in December,

I had withdrew Ethereum to my private wallet on the blockchain.com app then tried swapping it to Bitcoin but the swap was frozen and after 2 weeks I received a similar email as OP except the one I got didn’t mention gambling they just said my issue was a KYC issue

I was also worried about telling them the money came from gambling but since I withdrew to my private wallet I assumed I should be fine. So I showed them the withdrawal on my ignition account & also sent the other info they asked for & my funds were released an hour or two later.

Even if you withdrew to your trading wallet I would think you’d have no other option but to tell them the truth. Pretty sure they can’t keep your money but they will most likely close your account, but don’t take my word for it.

Their lack of customer service and the insane wait times to resolve any kind of issue, big or small, them closing my account would be the nicest thing they could do.

I literally had to spam their customer support for 2 weeks just the them to tell me what the issue was.

Then they told me someone from their escalation team was supposed to reach out to me the day they froze my funds but they admitted there’s no record of anyone actually reaching out so if I wouldn’t have spammed they daily my funds would’ve never been released.

Good news for you is that it took 2 weeks for me to get the email you received, after I responded my funds were released fairly quickly.

Lol, this has been going on since october.

I was going to walk away from it and just leave the money there but I forgot I had daily purchases set up. They got 4 days out of me before I remembered it and they are holding that money as well. So it seems to me they are willing to take my money

You should be able to call your bank about the 4 purchases. They should take care of it pretty quick