Has anyone else received this message? So this means no more “little gifts”. So many words were used they could have just said “we only care about you depositing, could care less keeping y< around”

Glad I signed up to other sites when the ddos was going on.

Yep. That doesn’t sound like making anything better, for us players. It seems to be only getting worse. Last days of this site, may be coming.

I got same email

“In our continuing efforts to improve your reward”….what a joke! Lol

How is taking away the only real reward we receive an improvement?

The “improvement” is they don’t want anyone complaining about not receiving freebies. Kinda had the community as a whole to blame for that.

The language of that message was written by a sophomore in high school. Next time proof your outgoing MASS communication for fluidity and errors.

In an effort to improve my rewards, you are taking rewards away from me… 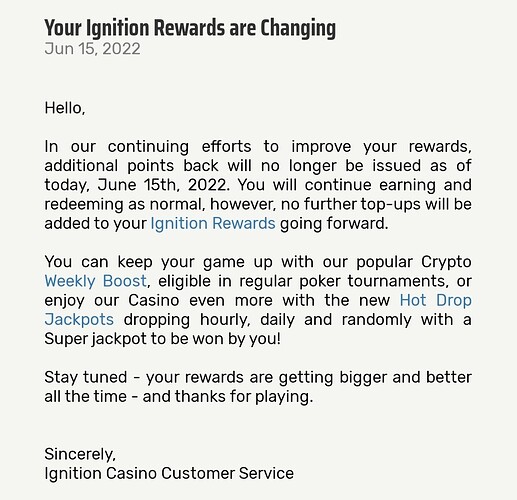 Not only did you take away rewards to “Improve” my rewards, you literally broke your own Ignition Casino’s Player Commitment to do it… You can see in the message notification it says as of TODAY, yet your commitment says 7 Days notice. Why even have a Commitment if you’re not committed to it and don’t even abide by it…? 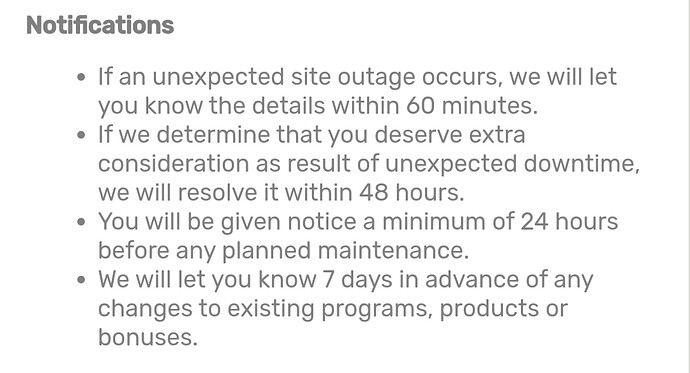 @moderators - I am eager to hear your thoughts on this.

I took this to mean the 15k weekly points, not the discretionary marketing gifts.

Being honest, this community (the one that posts most frequently and vocally on this forum) is the most hostile, immature, and unjustifiably entitled that I have ever seen. Sprinkle in an abject ignorance on RTP, comp systems, and gambling in general, and presto, you have recreated the magic that is this board.

Walk into a B&M casino and try getting crazy about the free stuff you deserve because you think depositing $1k in a week is a lot. Or if their systems are down so you missed your weekly free poker tournament, find a staff member and berate them. Threaten to take your 10k/month coin-in elsewhere, and report back the results.

As if the cringe level couldn’t go any higher, most of the arguments I see made are based on ludicrously incorrect reasoning. For example, instead of sticking to the factual (Ignition is removing some level of comps that I currently recieve), a poster in this thread self-righteously quotes the player commitment as “evidence” of…something. But unless a standard bonus was due today and that email came instead, then what we are looking at IS the notice described in the commitment. But since point-drops have no set schedule and aren’t an official program, then the commitment wouldn’t even apply anyway.

Ignition has its faults and I’ve certainly gone to battle when something seemed unfair or against ToS. But the majority of the whining and complaints I see are from players who vastly overestimate their value to a gaming platform.

To keep it fair, here is a potentially fatal flaw with Ignition that is showcased in today’s email: They vastly underestimate their competition, and misjudge who that competition actually is. Decentralized or quazi-decentralized casinos are likely dismissed, when they should be looked to for inspiration.

The only reason the new strain of online casinos haven’t completely “Blockbuster-videod” the traditional, is because of the crypto learning curve, the reluctance by older players ($$$) to seek out and trust new options, and lack of awareness of said new platforms. But each of those barriers becomes less and less significant with each passing day/month/year. Unless they can figure out a way to operate without cutting player benefits every 1.5 years, their non-poker revenue will effectively dissappear.

so true, the way you put it in context of how well it would go over for players to berate the staff of a casino in person was a really good way to put it.

Absolutely there are things that ignition can and should work on, but you are correct in saying that we as players should work on the culture of so many being so bratty when raising concerns and not being aware of how much we contribute to ignitions profit margin as individuals that lose a few thousand here or there which is a lot to us but not so much to them as a business relative to the whole scheme

I do think that the arbitrary withdrawal limits are a huge mistake, putting that sort of restriction on players actually makes people less likely to end up depositing back in after winning because we’ll just have to wait 3 days anyways so might as well play somewhere else instead. They’d probably make more if they allowed players the freedom to come and go as they wish.

It also sounds like they may be (hopefully) implementing a new bonus program in the future, but yeah it is probably a bad move to go and take away player reward programs the day after having like a month of DDOS attacks that broke the website and taking the program away without having anything to really take it’s place yet.

It is understandable to need to restructure promotional programs if they are not accomplishing the goals they want in having them but I don’t really think that the new Hot whatever slots (which seem to glitch out at times) will excite that many people enough to outweigh taking away little benefits when only a handful of people are going to be able to win those hot whatever slot prizes.

all in all yes, I get where everyone is coming from here but it’s also possible to give feedback about the site changes in a more constructive way than everyone always saying they’re gonna go just play at another site.

like if you’re going to play somewhere else, go for it whatever. as individuals leaving isn’t going to make a big difference and if you want it play somewhere else idk why take the time to even say so when you could already be there.
if enough people end up taking their business elsewhere they will notice and hopefully course correct but sometimes it seems like people always say they’re going to just leave to try to get free spins or compensation or whatever or they want someone to beg them to stay or something.

Isn’t this some funny shit? We’ll all start winning on the day we never log back in.

Well, I can’t exactly tell who you are responding to because my separate thread (and it’s 3 comments) were folded into this thread following comments made hours later. 🤷

So IF you were responding to mine, that was quite the amazingly long winded response to confirm that Reading Comprehension has officially passed on to the afterlife (i even included pictures) and that you missed the point so badly that I fear for your ability to find water while swimming in the ocean.

The points were that -

A) They chose to say “Improve” my rewards while taking something away. By all means, I’m all ears on how that is improving them.

B) The Player Commitment quite clearly says at least 7 DAYS NOTICE will be given for changes. So you are correct, the notice today is the notice, But… 0 < 7. Given the relative ease of the change, there isn’t really a solid excuse for not sending the notification LAST WEEK for yesterday’s change or starting it NEXT WEEK for yesterday’s notification.

C) If you aren’t going to even follow your own Player Commitment, then just delete it. Don’t have one, we didn’t have one for a decade…but when you create one and then just ignore it like it doesn’t even exist, it’s pretty disingenuous.

You kinda came off like the drunk uncle who crashed the 5 year old’s birthday party and started flexing after crushing the pinata with a baseball bat.

Now… IF none of your paragraphs of light reading were about my posts, then kindly ignore the last several paragraphs and have a wonderful Thursday.

I don’t know about you guys but I’m usually taken care of very well by my host and Pit bosses at my local Bally’s Casino as well as a few others I frequent.

Bally’s gives me freeplay for slots and table games every week and 2 nights whenever I want every week at one of the 3 hotels they have locally. I also have enough comped food that I could take at least 20 of you guys to dinner at their finest dining establishment.

So to me having perks disappear that are standard perks at most casinos is disappointing. When I ask for something in person (something reasonable) I’m at least told, “Sorry Mr. Kelley, I couldn’t do any freeplay but here’s a room voucher or a $100 food comp. When I ask ignition I’m 99/100 times told sorry but right now you don’t qualify for any freeplay.

Good perks are expected and a industry standard when reaching the higher tiers.

Perks are what creates regular and loyal customers. When you feel like you’re taken care of and appreciated and not just some degen that’s what it’s all about.

Being a little pissed off at perks being taken away and always being told no doesn’t do anything to create a sense of community or worth. Combine that with the site running horribly, being left in the dark with other issues, etc seems like a fair stance to take to me.

Right im with you on the comps. I get free hotel stays and dinner everywhere. Im closing in on platinum level here with way more losses than brick and mortar casino and im not sure what i ever have gotten or am going to get for this status. I know many are diamond but still 100k through the casino you would think would get you something. 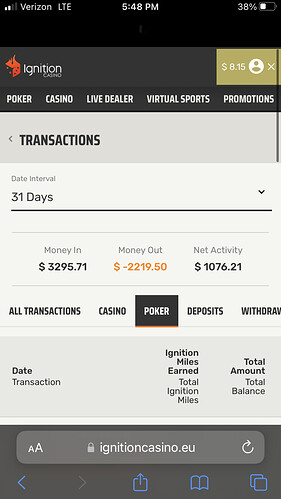 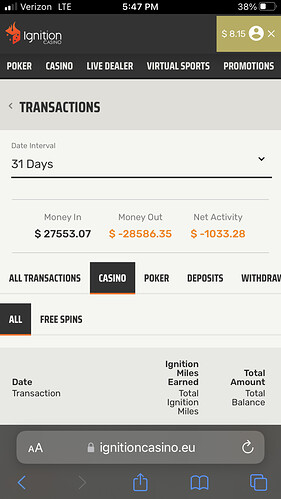 I will say that the support team and mods here on the forum have done a great job. I can say that they have resolved, answered, and given compensation for most of my outages and site issues. Probably 95% or better on poker. And with their credit i do get legitimate response and not the canned b.s. that i did from here in the past before the forum. So really my point here is dont kill the messenger when it comes to the mods. They are the only people handling these resolutions and before the forum it was really bad trying to email these guys.

Last point as i just deposited. No one is twisting your arm to play here. You can always just stop coming back. Lol

The thing is, they can’t. A huge step for a good majority of the customers here would be to go to gamblers anonymous meetings and quit gambling.

No doubt. Ill see you there.

Whoever wrote that is a total hack.