When do we get our WC free spins

I see the World cup is over and i didt get me 50 free spins for playing the selected poker tournaments. Any word on those?

I haven’t received them either. was told on Sunday by CS that she had talked to Marketing and they said that they would be sent out either that day no later than Monday night. now they say that we will get them 7 days after the tournament ended so that would make it on the 24th or sooner. that’s what was told to me now.

Quick to take the money for the tournament. But slower than a turtle for 50 free spins . The casino might go broke if they issued the 50 free spins right away ridiculous smfh!!!

well what do you know my world cup spins were issued

They were issued, enjoy the 35x rollover. Obviously I didn’t unlock the $8 I won with the $288 rollover required.

I haven’t got mine yet. It looks like they’re being rolled out over time maybe?

I asked about mine right now and they said that yes they are rolling them out but may take some more time to get to me, but offered to give me $15 for the wait. ask them now

I received mine but had no clue that it came with a 35x rollover. I had deposited prior to an email coming to me saying my bonus had arrived. My plans were to play in a poker tournament with the deposit money but when i seen the email i went ahead and claimed the bonus and took the 50 spins. I won around $44 on the bonus but quickly ran it and my deposit down to $11 where I tried to purchase a tourney ticket which was the reason for playing in the first place. Go over to poker however and my balance shows $0 which I knew immediately that it was a rollover issue. Had I known that it came with a 35x rollover I would have purchased the ticket immediately. The only thing the description said was that the bonus came with a $50 max win. There was nothing about a rollover so I discuss this for an hour and a half with chat reps and they tell me that they were going to take care of me since i didn’t understand how the bonus works. I replied I knew exactly how it works but don’t know how one works if you don’t inform me of it. She proceeds to give me $20. I play it down to $11 and go to purchase a ticket and guess what? She gave me a 35x rollover bonus you can’t use on poker. Completely pointless. I inform the mods of my issue and they show me some description showing the bonus came with a $500 cap and a 35x rollover. Can anyone tell me if the bonus description “when you claimed the bonus” showed $50 or $500 as the cap? I know for a fact it did not say anything about a rollover . And It would be a first for ignition to have such a high cap with such a large volume bonus that many people would be receiving and especially being for 50 spins at $0.50 each. Having a cap and a rollover is insane as it is but not surprising these days. The description after claiming the bonus doesn’t say anything about the cap or the rollover and only says to view terms and conditions. When viewing those it states that each bonus has its own specific terms and conditions so that basically explains nothing at all. It’s only $11 so it’s not the money that irritates me it’s ignition being greedy as hell and not doing what’s right.

Anything free that isn’t a ticket anymore comes with rollover. No such thing as “free” spins anymore. 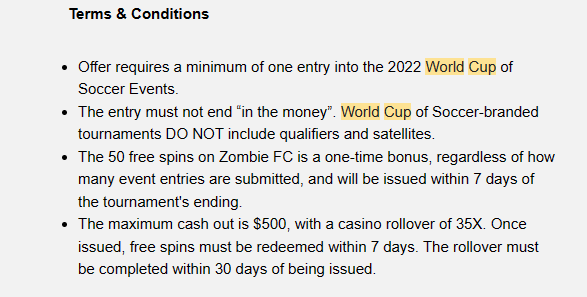 That was in the email when they announced the offer.

it would seem these have now been issued.